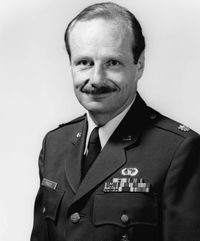 Vern is the most successful men’s coach since the beginning of the Air Force Academy intercollegiate rugby programs.

He began his love of the sport playing intramural rugby for three years at the Academy and continued his career playing the position of hooker up to age 54 on several teams.

Vern’s first operational assignment was at McConnell AFB, Wichita, Kansas where he served as Missile Combat Crew Commander with the 533rd Strategic Missile Squadron. During this time he was the founder, first Coach, first President, first Captain, and first Honorary Lifetime Member of the Wichita Rugby Football Club where three of his teammates were chosen to the USA National Rugby team. He was inducted into the Wichita Rugby Hall of Fame in 2013.

Vern was then sponsored by the USAFA Dept. of Management to earn his MBA at the University of Colorado and returned to the Academy in 1977.

Vern continued his coaching career in the fall of 1977 under another of our most successful coaches and teams’ founder, Alan Osur. Vern was the assistant coach of both the men’s and women’s teams during the academic years of 1978 – 1980. Before transferring out in 1980, Vern was part of the coaching team that led the team to a second in the nation finish, losing to Cal Berkeley in the finals.

After spending three years earning his PhD at UCLA, Vern returned to the Academy in the fall of 1983, again in the management department. He immediately rejoined as the men’s team as assistant coach under Squadron Leader Bill Mulvenney then stepped into the head coaching role in the fall of 1985 that began a seven year stint as head coach and set a standard for coaches to come:

- Second place National Champions 1987 (one point loss in the finals)

And after his retirement in 1992 and leaving the Academy, the underclass years he coached and mentored went on to continued national success:

During this time and after Vern also significantly contributed to the Armed Forces Rugby initiatives:

Prior to his military retirement, Vern was Chairman of the USA Rugby Collegiate Committee and was on the USA Rugby Board of Directors from ’89-’93.

Uncle Vern also had a positive and lasting impact on our cadet players. Many a time have we have heard, “if it were not for Vern and rugby, I never would have made it through the Academy”… words said by young individuals whom we now know as Colonels, Generals, CEOs, physicians and so on, a tribute to the man whose dedication to our game and to the Academy cannot be overstated.

After leaving the Air Force Vern had a distinguished career at American Airlines Decision Technologies, which later morphed into Sabre which was spun off as an independent company. He ascended to VP and carried on through a Sabre / EDS merger, finally retiring from EDS before taking on the academic role at University of Dallas as professor in the MBA program, and Academic Program Director for the Engineering Management, Project Management and Supply Chain Management Programs.

He and his wife, Laura, currently reside in Irving Texas.