May 1991 was the first USA Rugby Collegiate Women's National Championship, held in Alexandria VA, and Air Force won it! (see clipping in the media section and an article here -> [[1]]) and here -> [[2]]

It was a beautiful season because we KILLED everyone until the final game. We still won [the national championship!], of course, but it was one of the most difficult teams we played (Boston College). The final was close because after playing all our proceeding matches on the postage stamp pitch we did not adjust early to the larger pitch very well. Also Boston College were incredibly strong and skillful in the forwards (they had scrimmaged on a regular basis against Beantown who were the best pack in the world at that time) and like us they played hard physical rugby and wanted desperately to win.

The two top scorers in the tournament were Karen Perez (24 pts) and Joyce Elmore (20 pts). Tournament MVPs were selected, one from the Montana women's club, BC (their captain), and two from AF: Dana Teagarden and Margo Willoughby (Bjorkman). The BC captain, who got up first, was certainly disappointed in the outcome, and made a rambling long speech. When she finished, Margo got up and said "I could not have done this without the pack in front of me and the backs behind me". She then sat down, a perfect example of leadership and humility in a speech.

Shelley Ripple, Dana Teegarden, Tracy Hubbard, and Maggie Dawson were invited to an Eagle's tryout in Boulder, Colorado. They smoked everyone on the beep test.

Dana played for the West at Territorials in 1990 and 1991, and was named to the Eagle's in 1990 & 1991 while at the Academy and then again after she left, playing in two non-cap Eagle matches versus territorial sides. 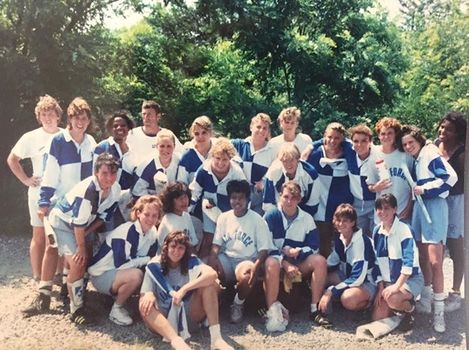 Vern Avery bought the quarters reversed jerseys for our championship game; he paid for them and gifted them to the team when we won.

Traveled to Marti Gras via School bus but had to leave prior to the championship match for their 20 hour ride home!

Laura Piper (prop/2nd row) was on the team (very sad that she died in the shooting down of the Black Hawk sometime mid 90s), Mo Barrett (FH/IC) broke her clavicle in the Princeton match, and after graduation, Lisa Viertel got married to a West Pointer and we never heard from her again...

More from the EPIC spring break trip (from Dar Schultz Smallman and others): Vern Avery was a VERY interesting individual and he set up this well planned spring break trip. We rented RVs (I remember Heidi on the phone bargaining for the RV prices) and piled in them from his house to California. I distinctly remember the looks on our faces when he insisted on shoving an old huge screen box (probably had tubes in it, any way it was probably a 4x4 foot box into the RV along with a Video Cassette tape recorder and I think an antenna or dish so that he could watch some rugby tournament that was occurring while we were on the road. We were driving through the mountains and a ton of people got car sick (Dar, who didn't want to watch the vomiting, crawled up in the upper sleeper). And then somewhere along the way one of the RVs broke down, so we had to pile everyone into fewer RVs and still people were getting sick (not drinking just car sick). Dar and 3 others were up top, arranged longitudinally, one at the head and one at the feet to avoid the vomit carnage below. We also had a bunch of frozen meat from Mitch's which we stored in the bathrooms and we must have cooked it along the way, but the bathroom tubs were full of frozen food. Finally two of us (Margo and Dar) cleaned out the "shitter" (reference to the "shitters full" line in national lampoon's vacation) by hooking it up to the sewerage pipe at various stops. We camped on the beach at Pendelton and some other not well remembered placed. Coach got upset when he was trying to find us all to get to a game after we took the RV out on the town and people went in all sorts of directions. Not much is remembered about the rugby play except we ran at the beach, the teams were very good, and the men's team was in LA. It rained in SoCal for what seemed like 10 days straight after 6 years of drought... some spring break! There were the usual team girl squabbles and Vern was in a bad mood (some family issues). Some of the team rented a car, drove to LA, stayed with friends, partied with the men's team, met up with one of squadron mates and drove home separate from the team. The EPIC spring break trip (from Hell)