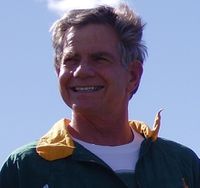 Alan began his rugby journey while stationed in England in the mid 60s, playing his first game for Shelford. He returned to the Academy as Director of US History and Associate Professor of History, but quickly began his quest for rugby. Teaming up with a few cadets, in 1968 he started the Academy’s intercollegiate rugby program. Years later, during his second Academy tour in 1977, he started the women’s intercollegiate rugby program. Under his leadership, these programs flourished and he has coached them to earn 17 Western championships, 8 final four appearances, and competed in 4 National Collegiate Championship games coming away as National Collegiate Champion in two.

Alan also served as the Western Collegiate women’s competition committee chairman, and at the national level, was active as the chairman of the USA Rugby Collegiate Committee, which began the Women’s All American Program. As chair, he ran the All American selection process for 12 years during which time he was elected as the Collegiate Director to the USA Rugby national board for a 2 year term. Here he originated and implemented the National Women’s College Development Camp in 1996.

As a player, Alan was always ready to put on the cleats. His play was intelligent and crafty, and he took every opportunity to take advantage of his skills and athleticism. To quote a former player: “When he ran with the ball, I swear his feet never touched the ground; he'd kick or pass it, always damn near perfect.” He played well into his 60s.

Alan was also a competent and sought after referee who has influenced (in a positive fashion) many other referees. In fact, one of Alan’s players went on to referee and then to lead and develop a national referee training scheme which stands today as a standard requirement for every referee in the US.

The impact of anyone's accomplishments is rarely noted, but there is no mistaking that Alan's accomplishments are widespread. A lasting legacy, ripples upon ripples that would not have happened were it not for Alan Osur.

- Many a cadet would not have continued at the Academy were it not for the balancing effect of the game and Alan’s leadership. Just one of many quotes (from Laura MacDonald, 2002 and USA Eagle): “Alan was a huge part of my rugby career.. he taught players discipline and professionalism/class when on the field. My success in rugby started at the AF Academy because of Alan's dedication to his athletes. I could never say thank you enough to Alan for the long practices in hail storms, kicking practice in blizzards, and for the best AFA memories I have! …it was Alan's mastermind that opened the door of opportunity for me”

- From a long time player who has started many a team, is a successful administrator, coach and recently head of the entire rugby programs at Colorado University, '71 grad Sean said, “In 1968 when we started AFA rugby I remember his leadership…. Coach Osur is still one of the finest officers, leaders and men I have ever known, either inside the AF or in civilian life.”

- Many players went on to play after graduation, some at high levels, and a few represented our country on rugby fields in international play.

- Many have gone on to coach, both back at the Academy as well as other teams, some at very high levels (Air Force and Combined Service teams, and even other country’s teams have been led by graduates of Alan's program)

- Many created rugby teams across the US and abroad, scores of teams that have provided thousands upon thousands of athletes the opportunity to play and enjoy the camaraderie of our sport.

- Many passed the rugby infection to their offspring. One of our past Rugby Alumni board members, Melissa Bauman Phillips, was a member on Alan’s 1994 National Championship team. She returned to the Academy a decade later to contribute and serve as the team OIC, but claims her first rugby influence came from her father, David Baumann 71, who was also coached by none other than, Alan Osur.

- Some of Alan’s ex-players ended up in the administration of civilian and military club, Unions, Service and Combined services rugby, the later with the goal to get rugby into the Department of Defense as a recognized sport. That was a coordinated team effort by many, to be sure, but our AFA rugby grads played a pivotal role and made it successful: rugby is now a fully recognized sport by the DoD. There are funded Interservice championships held annually that present opportunity to many of our AFA and graduate players, and we have had AFA grads in residence at the Olympic Training Center in California where the official Air Force duty was to train and compete for a spot on our National Rugby Team. That opportunity would not have been available had it not been for Alan Osur.

- And many have gone on to become leaders in their own right: Colonels, Generals, CEOs, physicians, fighter pilots and astronauts, most of whom attribute much of their success to lessons learned on the rugby field.

The list of AFA rugby graduates gets longer every year, the list of individuals who attained recognition on the field also continues to lengthen, and the impact on our service and country's representative teams continues because Alan Osur saw fit to start the program.

Just a few comments about Alan Osur the person..

Again quoting from a grad: “I don't think I ever heard him swear, except for during a couple verses of "Inverness". In fact, I don't really much remember him drinking lots of beer at the parties afterwards. But he was always there..."

"Al could always either put you in your place, when your head was too big, or cheer you up when you were immersed in beating yourself to death out of self-pity. His criticism was concise, to the point, and highly motivational. Call him a role model, an icon or a personal hero. He was, and is a fixture; one of those rare people who can do, and who can inspire others to do, things that are almost impossible for mere mortals"

When Alan retired from his IT job in 2006, he decided to apply for a civilian position in the Academy’s History Department. He was already the head coach of the women’s team when he applied. In his cover letter, there were several paragraphs about how he was academically suited, actually over qualified for that position, but he said these words which puts things into perspective for us: "As head coach I am in many ways a military training instructor since rugby is an integral part of the cadets’ military training, serving as a hands-on environment for teaching leadership, team work, and self-discipline. As their rugby coach, I helped many cadets with research and writing projects, similar to what I did when I was on the faculty. In spite of our success on the field, I do not believe that record is my most important accomplishment. Instead, what I was able to develop is a TEAM where the players enjoy being with each other, enjoy playing rugby, and enjoy being part of the Academy. My motivation helps players graduate with a positive attitude toward life and the Air Force."

Modest and short sighted, Alan only claims influence on cadets, but as the above stories tell, his personality and persistent passion for our game spawned ripples that have landed on shores far far away from the foothills of Colorado. He has had a profound impact on each of the grads he made contact with and through them, literally tens of thousands others who would not have rugby opportunity were it not for Alan Osur.

Recently honored with a AOG Affinity Group Lifetime Rugby Achievement Award, the inscription states, “The Father of USAFA Rugby. An accomplished Historian and published Professor at The USAF Academy in a career that spanned six decades! As Rugby Coach, you won two national championships in a career spanning five decades. You have enriched the lives of thousands of young men and women.”

Alan did sometime play with the cadets in the lower games. He was a captain, and apparently AFA had a requirement that cadets always address an officer as “Sir”. So one time when Al was running with the ball, he was about to be tackled and a cadet outside of him called out, “Sir! Pass me the ball, Sir!”

Another Al story. As you know, in rugby you can catch a kicked ball and call, “Mark!” at which point your opponents are supposed to stop and you get an uncontested kick to punt the ball away. Al was playing for the Barbos once and did a little pop kick over his opponent. Running around to catch his pop kick, Al noticed another opponent bearing down on him, intent on inflicting great bodily harm on Al. Thinking quickly, Al caught his own kick and yelled out, “Mark!” That’s not valid and the opponents are free to ignore it, but this opponent didn’t know that and so stopped, sparing Al injury. Smart thinking, Al.

PS. His contributions were memorialized in a video put together by a few of his women players and is worthy for all to watch to gain insight on the man who was the founder of our sport at the Academy: http://youtu.be/Bwvz7Vz0QSo 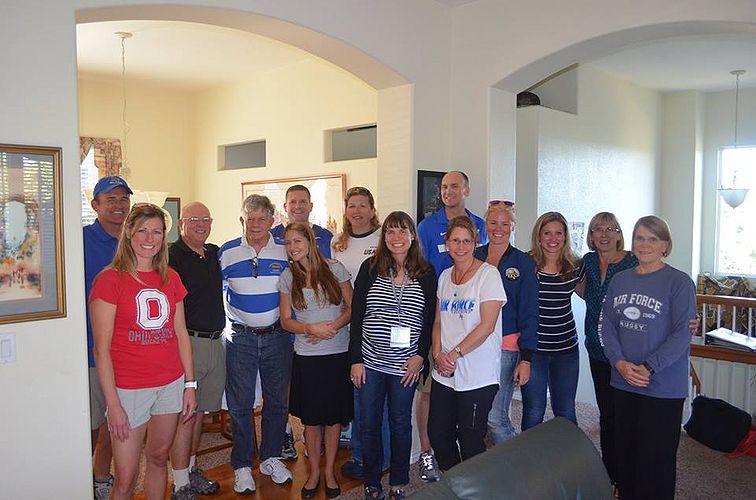 Left to Right: Tru Eyre (79), Victoria Whittaker Huss (04), Skip Shackelford (prior coach), Fred Cunningham behind Alan Osur, Michell Ruehl Von Hofe (03), Andi Vinyard (96) in the back in the t-shirt. In front we've Mel Cunningham and next to her is Tracy (Dupree) Coyne (96). I'm not sure her husband's name behind her. In the A-jacket Nikki Jansen (06), Next to her is Angela (G-unit) Hodgen Hearn (06), Judy Shackelford and Alan's wife, Lisa. 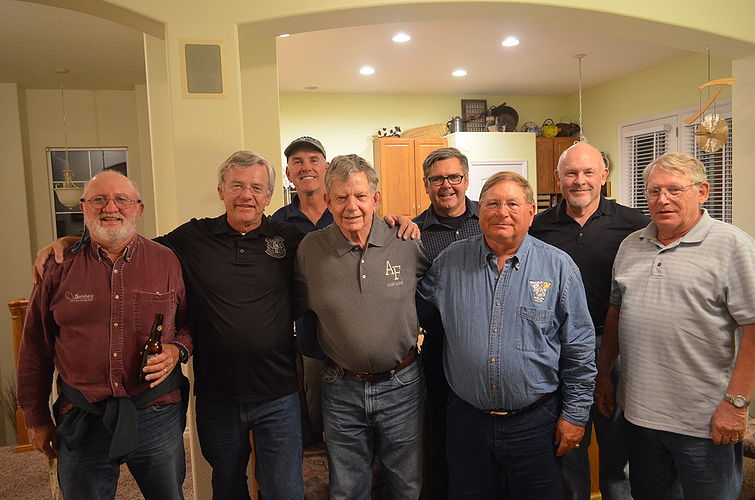